In an earlier entry I wrote about my reasoning behind choosing Classical Conversations (CC).  As I mentioned in that entry, this year was to be our trial year.  I am a perpetual skeptic who doesn't generally jump into something without testing the waters first.  Below I will discuss my first impressions of the program after our first year.

I'll start with my son's opinion.  He is 6-yrs old, and is enrolled in the youngest group of the Foundations program.  He told Grandma on the phone the other day that he loves his "school".  He says his favorite part is singing the timeline song, and he often requests to play it in the car.  He was devastated the times we had to miss class.  I am surprised by how much he enjoys all the memorization and how quickly he is learning such a vast amount of information.

My 4-yr old is picking up on it too.  It cracks me up to hear him come wandering down the stairs singing, "Minoans and Mycenaeans", partly because it sounds more like, "Minomes and Mycemeens".  He doesn't even actively participate in any of our CC studies, he's just picking it up by being around.  He's so proud to be able to recite some of the same information his brother is learning.

As for me, I am overall very pleased so far.  I have mostly positive comments regarding the program with only slight criticism listed below.

We are definitely going to continue with the program next year with both boys enrolling in CC classes.

The past week we have been working on a Family Unit.  We all had lots of fun with this unit because we looked at lots and lots of family photos as we discussed vocbulario de la familia.  The kids seemed to catch on to the vocabulary very quickly, and since the grammar was mostly a review, we only spent a week on family.  Our Tuesdays and Thursdays are full with Classical Conversations and gymnastics, so that leaves us with 3 days per week for our Spanish lessons.  Below is an outline of how our lessons went over the three days:

To introduce the vocabulary, I made a Powerpoint slideshow of pictures of all the people in our family.  Each slide contained one photo and one or two vocab words.  (For example if the picture was of my oldest son and his grandma, the title of the slide was Nieto/Abuela.) I had the vocab words fly onto the screen with sound effects, which the boys loved!


Next we played Old Maid (La solterona) with a family Old Maid game I found at the Dollar Store.  I wrote the names in Spanish on each card, for example Uncle Joe became Tío José and Grandma June became Abuela Junio.  Each time we got a match, we had to say the name on the card in Spanish. 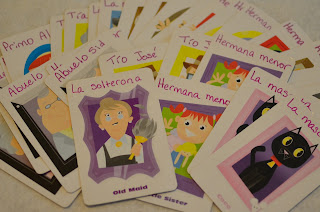 Our grammar to go along with the theme of familia is to continue our study of masculine vs. feminine words as well as discuss the terms "mayor" (older) and "menor" (younger).  In case you haven't noticed, we are not studying in-depth grammar. Since my boys are both so young, I feel deep grammar lessons would be useless.  My goal is to hit one, maybe two grammar points each lesson.

To practice el/la words, we sorted all the Old Maid cards according to gender.  Then I held up random cards for the boys to tell me el/la, abuelo or abuela, etc.

To discuss the concept of older and younger, I asked my sons which one of them is the "hermano mayor" and the "hermano menor".  We talked about other siblings we knew and which of them would be "mayor" or "menor".  The Old Maid cards have older and younger brothers/sisters, so we practiced using  the grammar while we played the game.

To start off our review of family vocabulary, I had the boys each pick their favorite photo album.  We looked through each of the photo albums and named all the people in our family.  We talked about how some members of our family had lots of names, for example Grandma could be, abuela, madre, hija, and tía.  Lastly we watched the familia slideshow again. 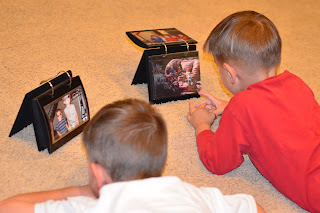 For today's grammar review we read La Semana de Cookie, a book that my kids love.  After we read it, I said we were going to have a contest, girls vs. boys, to see if there were more masculine or feminine words in the book.  We made a chart on the white board to keep track.  The boys were ecstatic that the masculine words won by 2. 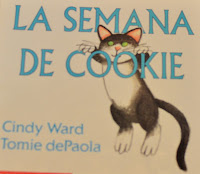 We started off by watching the Family slideshow one last time.  This time we used it as a quiz.  They boys each took turns guessing the title before it flew onto the screen.

To complete our familia unit we made family trees.  I had two sets of pictures of each member of our family.  The boys chose their pictures and cut out the faces (with some, well lots, of help).  I had construction paper with the boxes and lines already drawn for the shape of the family tree.  I also had labels printed with each persons title/name.  First the boys peeled and stuck the labels in the proper places, then we glued the pictures onto construction paper in the form of the family tree.

Posted by Unknown at 4:45 PM No comments:

My Thoughts on Singapore Math

I have been using Singapore Math (SM) with my 5-yr old for a couple of months and thought I'd share a little bit about why I chose it and my initial impressions.  SM was developed  in 1982 by a Singaporean government-appointed team.  In case you've never heard of Singapore, it is a small island, city-state just south of Malaysia.  It is a country of mixed peoples (there are four official languages!) known for their innovation, efficiency, and yes, math scores! 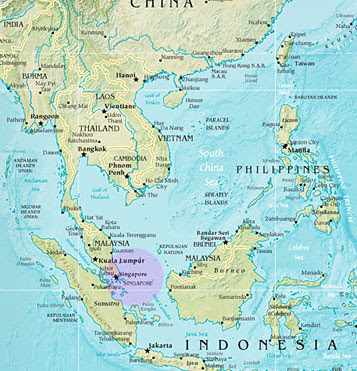 Why I Chose Singapore Math

After reading a little about Singapore Math, I knew it would be a perfect fit for my 5 yr-old.  He is very math-minded, and I knew he needed a challenging program that emphasized problem-solving and mental math.  Here is what the Singapore Math website writes about their Primary Math Programs:

There are two versions available for use in the US, the US version and the Standards version.  From what I could gather through the information available on the Singaporemath.com website, the US version is the "original" SM but made for use in the US.  (Sections for US standards of measurement, US English instead of British, etc.) The Standards version includes all the same information as the US version, but with added concepts and an earlier introduction of various concepts.  I read through all the information available through Singaporemath.com as well as several different forum posts to determine which version would suit our needs.  As with anything, people on both sides of the fence are very passionate about their side.  Some people like the added difficulty of the Standards Edition and some say that more is not necessarily better.  What I surmised was that, aside from price, there wasn't much difference in the early grades (through 2nd).  The Standards version is considerably more expensive than the US version, so, I decided to allow frugality to reign over my decision for now and went with the US version.  We will probably make the switch to the Standards version once we reach the 3rd grade level.

For more information on specific differences, click here to see a comparison chart on the Singapore Math website.

For each grade level, except Kindergarten, there are two textbooks and two workbooks (ex. 1A, 1B and 2A, 2B).  For Kindergarten the workbook and textbooks are combined (except in the Standards Version).  There are also teaching guides, extra practice workbooks, testing materials, and manipulatives available for purchase to go along with each grade level. I like to keep things simple, so I only ordered the textbook and workbook.  I ended up starting my son on level 2A, since he is already strong in math.  If you're unsure of which level your child should start with, there are free placement tests available on the SM website. 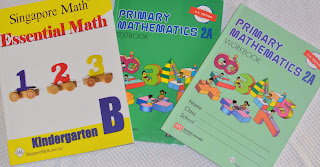 
I love the many different ways the text teaches the same concept.  For example, in the beginning there is a lesson to review addition without renaming.  The concept is shown by combining two groups of objects to create a larger group.  Next it is demonstrated in a chart with columns for hundreds, tens, and ones places.  Then there is an example with bundles of tens and ones pencils being combined.  Finally there are vertical, horizontal, mental, and story practice problems.   The workbook then uses a combination of puzzles, word problems, games, and exercises to practice the concepts.


I enjoy the bright colorful pictures; my son and I both find them engaging.  I like the way the information is organized in the textbook so that there is not an overwhelming amount of information on each page.  It is simple, logical, and easy to follow.


If you are interested in purchasing Singapore Math, you can order it from the SM website or I found several of the books for sale on ebay in new condition.

I did go ahead and order the Kindergarten B ($10) book to eventually start with my 3-yr old, but I am not nearly as impressed with the Kindergarten text as the rest of the primary math.  The US edition Kindergarten book is not in color, and for the price, I feel you'd be money ahead getting an early math workbook at the Dollar Store or Target Dollar Section.  I did look through the sample pages of the Standards Edition which can be found on the SM website, and both the textbook and workbook (remember the Kindergarten Standards Version has a textbook and workbook) are in color.  These might be more engaging for a little learner, but are also much more expensive, $23 for the text and $15 for the workbook.

My Recommendation for Pre-K

I have been using this workbook with my 3-yr old and love it!  I believe I got it at Joann's with one of their coupons, but I've also seen it available on Amazon. 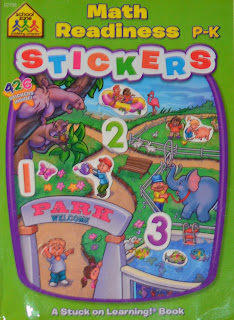 I love that it is stickers, so my son doesn't have to be able to write to complete the exercises.